Cabin in the Forest 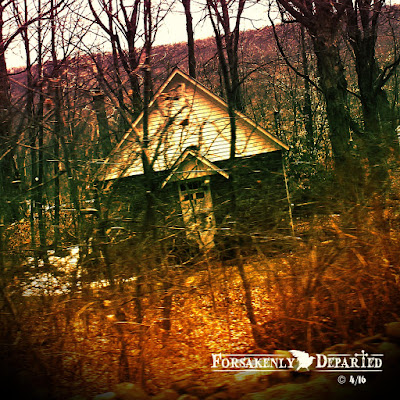 If you're wandering through the forest and come across a small cabin made of stone, remember this...  Those who enter, never exit sane.

The legend goes as follows...  A small cabin sits deep in the forest unoccupied after the death of an elderly woman who died in bed of natural causes decades ago.  She was one who never liked company. nor ventured out in the public.  In fact, she was not one to like the Human Race, thus being the reason she kept to herself.  People to her were a threat as the media exploited all the negativity of wrong doers spreading propaganda all over the news and papers.

The tale tells that she cut herself off to World becoming a complete Recluse. As she became an Eremite, reading the Bible, and through the years she couldn't even cope with what was said in the Good Book.  All ties were broken with nothing but herself and the wildlife around her.

Today if you're chatting among friends at the local Pub, you just might hear the story of how her deceased body is still lying in bed as she was the night she turned in.  What happens when someone brave enough enters the one and only door of the cabin is uncertain, but one thing is for sure.  They never leave with a sound mind becoming terminally mad to the rest of their days never saying a word.