Fair Well to My Lovable Companions 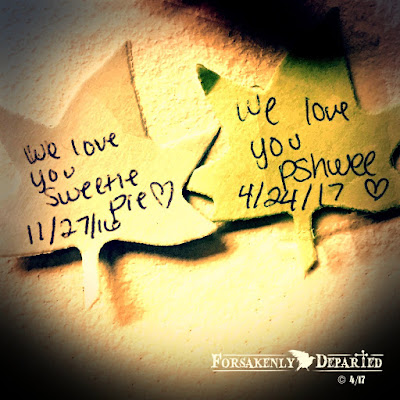 It's hard to lose a pet that's been in your life for several years.  I must admit it's even harder when you lose both pets just within a few months from each other.

As many know we lost one of our Cats just two days after Thanksgiving who was the tiny little Runt of the Litter.  She was exactly what her name was "Sweetie Pie."  She was lovable and would not let you escape from petting her.  But after suffering multiple Strokes, her time was expired.

Just today our other Cat "Mrs. P" or "Pshwee" as she was often called past in my Mother-in-Laws arms after she meowed several times in pain.  She was suffering from Mouth Cancer and deteriorated rather quickly losing more than half her weight.  She was a solid and strong Tortoise Calico who wouldn't let a Mouse past her.

Now both are now together again in Kitty Heaven for all eternity as their leaves forever hang side-by-side on the Memorial Tree in the Veterinary Hospital.  May they rest in eternal peace as we all will always miss you!