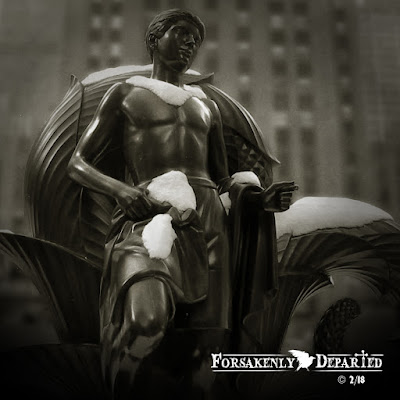 Prometheus (aka: The Hellenic Lucifer)

He was a Titan God who was given a duty of moulding mankind out of clay.  This was only to better the lives of his creation that brought him conflict Zeus (Sky & Thunder God and ruler of all Olympian Gods).  First and foremost was that Prometheus tricked the Gods out of the most enjoyable portion of the Sacrificial Feast in order to obtain the meat for the feasting of man.

At this point Zeus ordered the creation of Pandora (First Woman) to deliver misfortune into all mankind's homes and/or deprive mankind from having the company of good spirits.  This was the punishment for Prometheus as he was arrested and bound to the stake on Mount Kaukasos (Caucasus) where an Eagle was allegedly lured to feed upon his forever regenerating liver or heart.

After many generations have passed, Herakles (Heracles the Great Hero) arrived and released the agonizing Prometheus from his torture.