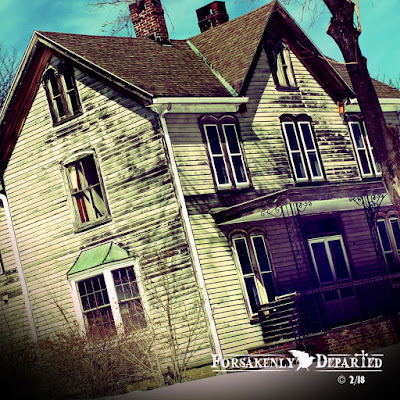 It was at that very moment at 3:15AM when Liza awoke to see it there standing in her bedroom doorway.  A heavy black mass manifesting as it was drifting nearer.  There was no escape for the only way out was the second floor side window that was much to high to leap out of without bouncing off the bay window's corse metal roof plummeting to the ground below.

Liza closed her eyes as the mass appeared to be demonic standing before her rattling the bed off the hardwood floor with a rumble that was heard throughout the entire house.  She screamed at the top of her lungs as her parents ran into the room only to be thrown out and slammed against the wall with an unknown force.  Within a second everything stopped without any signs of anything happening.  The entire family left minutes later leaving everything behind.

From that moment on, no one has reentered the house in fear of something demonic might appear.  Yet, if you pass by any given night at the precise time of 3:15AM, you will see the drapes pulled back in the upper side window with a woman dressed in red looking out at you.