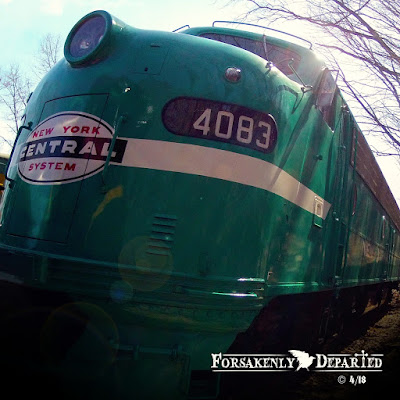 This historic E8A Electro-Motive Division of General Motors (EMD) is currently owned by the United Railroad Historical Society of New Jersey.  A Diesel-Electric Locomotive built in 1953 in La Grange, Illinois specifically as a streamlined passenger hauling locomotive.  The E8A was purchased by many major railroad companies throughout the United States.

This New York Central Railroad was used to pull some of America's most famous trains, such as the "20th Century Limited."  This number 4083 is sadly the only one out of three who survived the three-locomotive trio with the "Century Green" color scheme in 1961.

All aboard and live the dream of yesteryear once again before the the last of these magnificent beasts are gone forever!