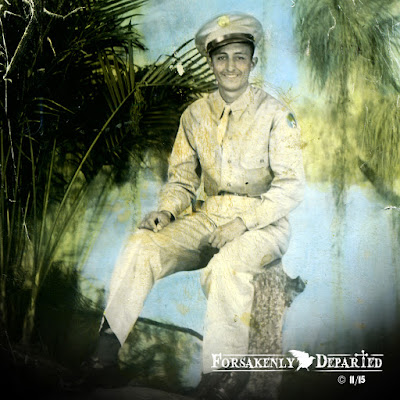 Depending where you are in the World it's a day that marks the anniversary of the end of World War I.  It was; “The War to End All Wars" though unfortunately it didn't.

Today we honor Military Veterans from the past to today. Living or Dead.  All persons who served in the United States Armed Forces.  It coincides with other holidays, including Armistice Day and Remembrance Day.  Take a moment to reflect your Family Members, Friends and/or Loved One who served.

Photographed here is my Great Uncle Robbie who was on Omaha Beach, Normandy France on D-Day, 6, June 1944.  As I vaguely remember his stories when I was a Child, he was one of ten Solders that came home out of his entire Infantry.  Meanwhile in another part of the World my other Great Uncle Paul was M.I.A., captured and placed in a Concentration Camp for quite some time only to show up on his Brother's (my Grandfather's) doorstep a couple years later.  My Father (another Veteran) remembers tales of what he went through.

So, if you see someone today that served or still is active, stop and strike up a conversation, listening and giving them your full attention.  I guarantee you that you'll appreciate what they've done or are doing as well as totally making their day!