"The World" Turned Up for Me 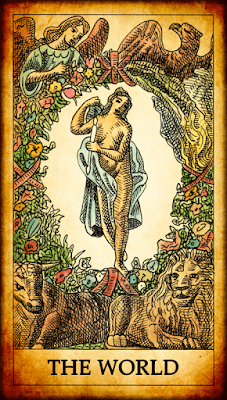 The Twenty First Card of the Major Arcana

Though some may not endure and believe in the reading of Tarot Cards...  I am a true believer for when they were read to me over thirty years ago by a close friend who was an avid Reader, my fate as she predicted was hauntingly accurate.  My buddy who also had his read at the same time was skeptical thinking it was all a farce.  Unfortunately, his fate was as accurate as mine though less fortunate ending horrifically.  This is something I seldom speak of and usually only to the one who read the cards to me.  She remembers vividly as I do and comes up in conversation every time we speak.  I'll be honest when I say that I'm extremely reluctant to have my cards read to me for I so believe in it to the point of fearing what my fate from this moment through the future will be.

As for the meaning of the World card.  It is mostly associated with Earth and often refers to the end of one Quest or Journey and the subsequent search that is to begin a new Quest or Journey.  The central image of the card is of a beautiful nude Woman frolicking and dancing within a Wreath of Olive leaves.  This Wreath of Olive leaves symbolizes Victory over the struggles I have faced.  (This explains my long life struggle in a satisfying and self fulfilling career).  The Staff, Wand or Baton she holds in each hand symbolizes that I will continue upon my path and the two pathways of Creation Evolution and Involution which now are open.

I by no means am knowledgable in the reading and/or deciphering the meanings of Tarot Cards, yet I'm quite intrigued by them and seek out what each represent.  I come to find that there are several variations of the same cards as well as meanings which puzzles me.

One thing for sure, I am blessed that my World has not been reversed.