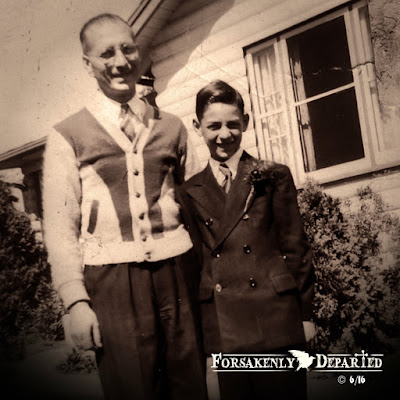 We all heard the phrases:
"Like Father, Like Son"
"The Fruit Doesn't Fall far from the Tree"
"A Chip off the Old Block"
"Follow our Father's Footsteps"

Simply put, these phases or if you want to call them proverbs are dead on as much as we tend not to agree.  We like our Fathers and his Father have the same manner that passes down from generation to generation.  Father's and Sons very much resemble each other and tend to do what their Father's did before them.

Have you ever once stopped and say to yourself:  "I'm sounding just like my Father right now!"  Or have you even been told that you sound just like your Father?  I have countless times...  Is it such a bad thing to be compared with a person who help bring you into this World?

As much as those behaviors we act upon like our Fathers we tend not to like, their are far greater behaviors we tend to do that are frequently ignored.  Take a moment and think about them, you will surprise yourself with how many there are.

This is my moment to thank my Father for those ongoing wonderful behaviors that I see myself perform daily.  As the Proverb repeats itself over and over through generation after generation, the fruit really doesn't fall far from the tree!

Here is a photograph of my Father (the Chip or Fruit) and his Father (the Old Block or Tree).  I'm guessing this was taken in the year 1939 or 1940 standing in front of their small house after moving from Brooklyn N.Y.