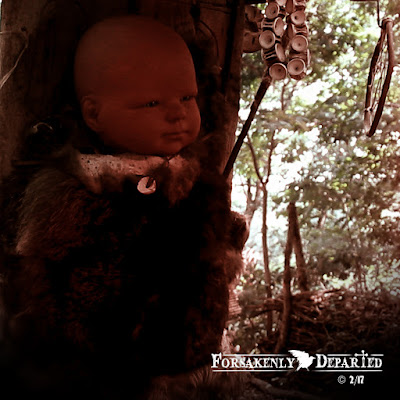 No strollers, no playpens and no carriages to contain curious babies from wondering into the dangerous forest.  Back in the days long before Christopher Columbus allegedly discovered America, the land was enriched with Indians consisting of many tribes.  New Jersey had the Lenape (len-AH-pay) Indians who lived in what is now New Jersey, eastern Pennsylvania, southwestern New York State as well as a touch of southern Connecticut.

But the babies of back then were hard to monitor from exploring in areas that were dangerous being the forests were abundant with Black Bear, Bobcats and Mountain Lions.  The Lenape were smart and used resources that they had to make things work.  They simply made sacks out of animal hides and fur fastening them on the trunks of large trees.  Slipping the babies into the sack to keep them out of harms way and wondering where they shouldn't.  They were safe, warm and always in eyes view for everyone in the village to see.

Shell, bones and anything else that would chime during light breezes were hung in front of the babies to keep their brains stimulated and amused.