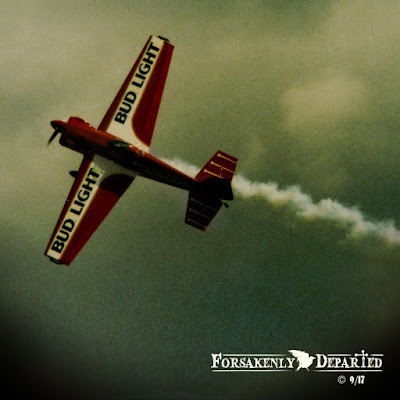 The Loudenslager Laser 200 Bud Light Stunt Plane flown by Leo Loudenslager won an unprecedented seven U.S. National Aerobatic Championship titles between the years 1975 and 1982 as well as the 1980 World Champion title.  This plane was originated as a Stephens Akro with it's sleek aero-back design.  However Loudenslager completely modified it with a new fuselage, wings and tail to crate a lighter and more powerful plane.  This enabling it to maneuver more swiftly and perform Aerobatic Stunts to awe any crowd whom travel far and wide to see it's spectacle display in flight.

An iconic plane that was heavily influenced with looks and performances through the next generation of Aerobatic Aircraft.  Now retired and displayed at the National Air and Space Museum at the Smithsonian Institute I am pleased to have had the opportunity to see such engineering and modifications in action.

I photographed this actions shot during a 1981 Air Show with a Pentex K-1000 fully manual camera and was lucky to capture the Loudenslager Laser 200 Bud Light Stunt Plane in all it's glory!
at 7:16 PM