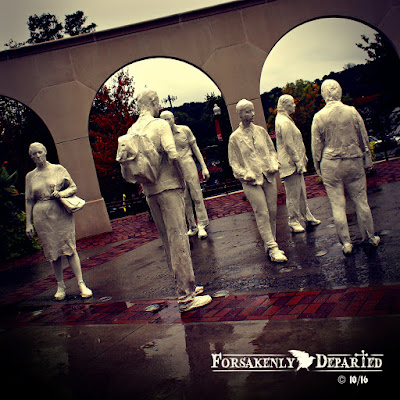 A rainy day yesterday spent with our Daughter at the Open House of Montclair State University.  An fine sculpture by the Artist George Segal (Not to be mistaken with the Actor) was created in 1992 entitled "Street Crossing"  The sculpture consists of seven Bronze life size figures covered in Patina.  It's part of Montclair State University permanent collection as it was gifted by the George and Helen Segal Foundation.

George Segal, born in New York City on November 26, 1924 and died in New Brunswick, New Jersey at the age of 75 on June 9, 2000.  He was best know for his life size figures in plastered white to give them a ghostly, melancholic look.  Usually one or more figures are placed randomly in urban areas such as street corners, bus depots, and diners to giving contrast with the real World.

You might have seen the works of George Segal at one point during your travels!