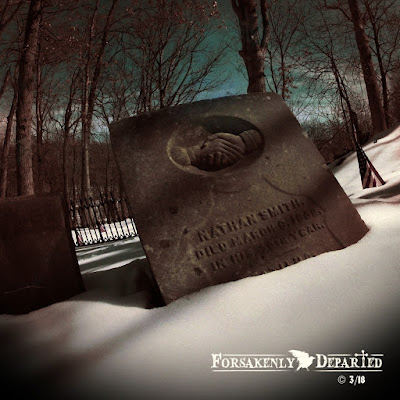 The handshake on tombstones is something I see continuously when strolling through a cemetery.  It has been something haven't payed close attention to until I noticed something.

Is the handshake an earthly farewell to someone whom passed on or a welcoming gesture into the after life in Heaven.  I'd like to see this as a symbol of matrimony on a married couples tombstone.  Closely look at the cuffs of each hand next time.  One being masculine and the other feminine as seen in this photograph.

Though nice thoughts of a married couple being back together, there are other speculations that the Devil himself has a say in this handshake.  Clasping tight in a handshake dragging however it might have passed on into Hell.  An unpleasant thought for sure and the true meaning us up for debate.

I do prefer the thought of two loved ones being together unto death do us part and reunited once again within Heaven's Gate forever until the end of all eternity!