I heard a tale quite some time ago
To my recollection it goes as follows: 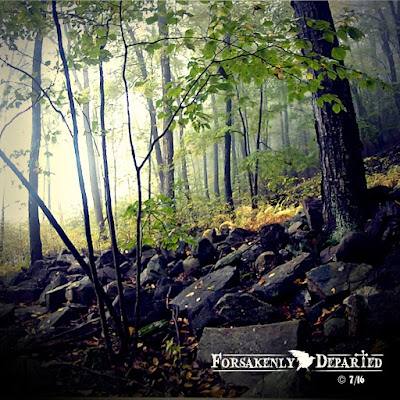 A Father takes his young teen Son into the forest and sits him down onto a rock.  He blindfolds his Son and tells him that he must remain sitting on the rock blindfolded throughout the night.  The blindfold should not be removed until the morning Sun's first rays of light shine through.  The Father also tells his Son that he will be left alone and cannot cry out for help regardless how frightened he may be.  If the Son lasts through the night without leaving the rock or taking the blindfold off, he will become a Man.  The Father also made his Son vow never to tell anyone about his experience to other Boys for they have to go into Manhood on their own without aid.

The Boy sat there with the blindfold covering his eyes as he could sense the night getting pitch black.  The wind swiftly blew through the trees making them creak as they rocked back and forth and the sound of wings flapping just above him ran chills up and down his spine.  The Boy was naturally terrified as the howling of beasts were distant in the forest becoming closer and louder.  Grunts, yelps, whining and snorting were down by his feet as the Boy desperately tried to ignore whatever was happening so not to break his vow of crying for help or running away.  He was determined to remain seated and blindfolded to become a Man at daybreak.

The time had finally come as the Boy saw daylight peering through his blindfold.  He reached around his head untying the blindfold as he looked around.  It was then he saw his Father sitting there on a rock next to him.  His Father was there the entire time at watch making sure no harm would come to his Son.

The Father explains, even when we don't know it, God and his Guardian Angels are watching over us and sitting on the rocks beside us.  As when we feel fear or in harms way, we are being protected.  The Father's last words before announcing his Son into Manhood were:  "Just because we cannot see God or the Guardian Angels who watch over us, doesn't mean they are not there.  For we walk by Faith and not by sight!"