Great Falls of the Passaic River 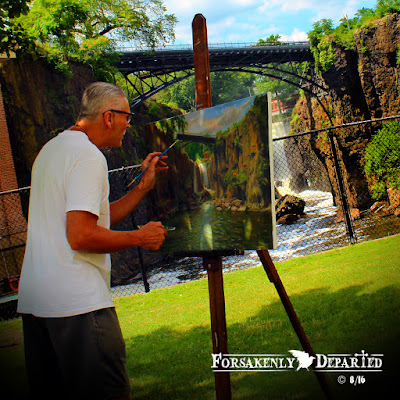 GREAT FALLS of the PASSAIC RIVER

Hidden beauty surrounded by a bustling metropolis lies the Great Falls in Patterson, New Jersey.  They are 77 feet (23 m) high and were formed at the end of the last ice age approximately 13,000 years ago.  Alexander Hamilton had a vision in 1778 as the Great Falls to power a multitude of industries along the Passaic River which was a developed into what was called the "National Manufactory."  This was the Nation's first planned industrial city,

Today the waters still fall as they did for centuries and is now is protected as part of the Paterson Great Falls National Historical Park administered by the National Park Service.

Here, an Artist takes the time to view the beauty of the Great Falls and render it in an oil painting.  He was kind enough to allow me to take a photograph as he masterly executes his artistry!